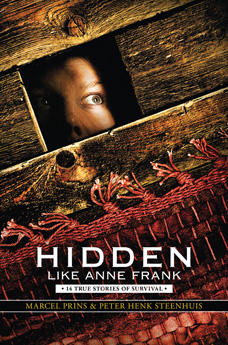 Jaap Sitters was only eight years old when his mother cut the yellow stars off his clothes and sent him, alone, on a fifteen-mile walk to hide with relatives. It was a terrifying night, one he would never forget. Before the end of the war, Jaap would hide in secret rooms and behind walls. He would suffer from hunger, sickness, and the looming threat of Nazi raids. But he would live.

This is just one of the incredible stories told in HIDDEN LIKE ANNE FRANK, a collection of eye-opening first-person accounts that share what it was like to go into hiding during World War II. Some children were only three or four years old when they were hidden; some were teenagers. Some hid with neighbors or family, while many were with complete strangers. But all know the pain of losing their homes, their families, even their own names. They describe the secret network of brave people who kept them safe. And they share the coincidences and close escapes that made all the difference.

order locally at the American Book Center in Amsterdam